The another story which is ready to fascinate you…this is a totally hitech gadget which you can’t see on even James Bond movies. This is another bombshell after LG watch phone, THIS IS LG-GD910,and it ensure you to feel comfortable after wearing this because LG used materials and stylistic elements from top manufacturers. The thickness of a Watch phone is 13.9 mm and has a curved tempered glass face and high quality metal casing.It is a first touch watch phone in the world to feature 7.2Mbps and 3G HSDPA compatibility,enabling high speed data transmission and video phone calls usinfg the built-in camera. The watch phone is capable of sending messages,making calls.Also its main feature is its touch screen interface on its 3.6cm screen and LG’s intuitive flash interface. Voice recognition features,which can be used with or without Blietooth handset,make it easier to place calls and look up contacts.Text-to-speech reads text messages and other information out loud for even greater convenience. 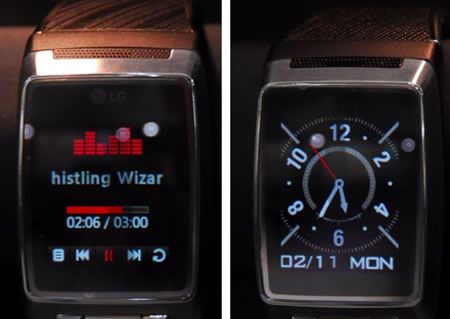